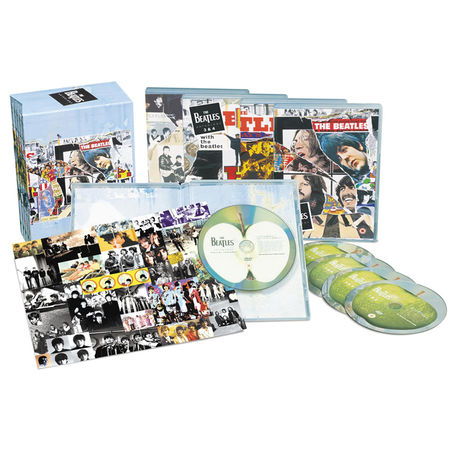 This box set series is a documentary on the life of The Beatles. It features clips from many of their songs as well as in-depth descriptions of their songs, tours, and lives. Running time 600 minutes.

The Beatles Anthology was initially broadcast as a TV miniseries to run alongside the series of three Anthology double-CD albums. This set of eight documentaries has the heft and scope of one of Ken Burns' expansive projects.
The documentary material is copious, including early performance films and tapes, at the point before they found their true voices. The actual Beatlemania years--beginning in 1963 and concluding in 1970--feature extensive performance films, as well as home movies and archival material.
This stands as a comprehensive document of that heady period, the second coming of rock & roll, as the Beatles took what Elvis had started and expanded upon it exponentially. This box set gives a solid sense of the historical context and the way these four musicians changed the world around them in the 1960s.