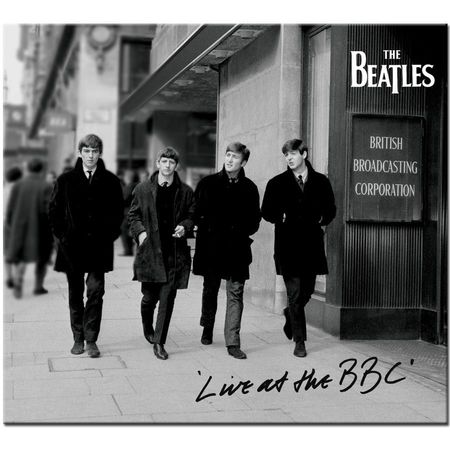 Live At The BBC Repackaged & Remastered

Once upon a time the BBC was a young institution in a world long before Beatles, when broadcasting Uncles and Aunties and chaps with names like Commander Stephen King-Hall (‘be good but not so frightfully good’) and L. du Garde Peach guided our attitudes and provided some of our music for us. I remember those days.

If we wanted any rough old stuff like jazz or blues we mostly had to get records or listen to records at friends’ houses. This was the world in which the Beatles were children, in what Kevin Howlett rightly calls ‘wireless innocence’.

In the early 60’s there was an overlap between ‘wireless’ and ‘radio’ in that when the Beatles were making their first broadcasts, Uncle Mac was still playing records for children though by now he was quite a grouch about the way things were going; the modern world was not much for him. But things had to loosen up, lighten up, and instead of admonitory uncles, the Higher Power sent us the breezy boys-next-door.

The strength of the BBC was that it was able to manage change and their welcome to the Beatles was magnanimous and the Beatles’ willingness to put a girdle round the earth to get on the air was almost selfless. They worked like dogs – once recording eighteen songs in one day (16 July 1963).

At first, knowing the value of radio they were glad and proud to use it. In the end, they did it as a duty but nonetheless, long after grabbing world fame, they continued to talk to Britain with a good spirit for, I presume, scale fees.

This collection is of a distant era; when London was six/eight hours from Liverpool, when London was The Big Time and almost still ‘The Big Smoke’. Trains were still steam. There was no take-away save fish and chips. No ‘Sun’. The rudest thing in newsprint was ‘Reveille’. Television was black and white; there were two channels.

It was a time when a pop singer played ballrooms, clubs, Odeons and Gaumonts, with about five others on the bill, maybe comics, ballad singers not quite trapeze artists but close… Some ‘teen idols’ were deplored – still are – but not then the Beatles, not after they became our cheeky chappies, our Elvis, took up residence on the front page, and in the zeitgeist of age, helped establish the booming creative potential of provincial England.

The Beatles gave us a continuing soundtrack of unparalleled charm and reassurance. As long as they kept on delivering fresh songs along with the morning milk, everything was right in our optimistic world. Quite quickly, the Beatles became an institution all of their own, with all sorts of attendants – fanatics and detractors, revisionists and archivists, accountants and lawyers, scribes and Pharisees.

That the Beatles were woven into the fabric of British life was due in large part to the regularity of their attention to good habits – the Christmas messages to fans, the package tours, the visits home to Liverpool families, an honest paying of all the expected dues and in no small measure to the BBC, who provided that unparalleled broadcasting expertise to keep the nation in touch with ‘the boys’ through fifty two broadcasts. Radio allowed them to ‘be themselves’ and that was always enough for the Beatles and for their followers.