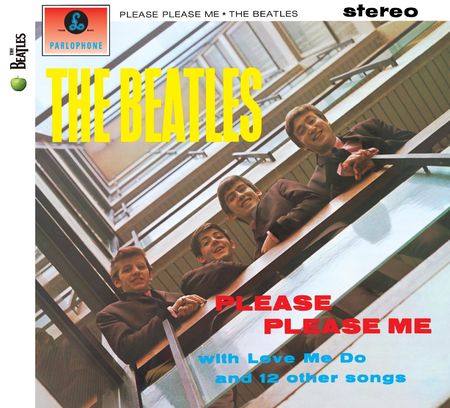 The Beatles' Please Please Me album was rush-released by Parlophone on 22nd March, 1963 to capitalise on the enormous success of the title track which had been the group's second single and their first no. 1 in the majority of UK charts.

Ten of the album's fourteen tracks were recorded in just one day - 11th February, 1963. These included a mixture of stage favourites and "Lennon-McCartney originals". The four remaining songs had been committed to tape in 1962 having formed the B-side of their debut release and both sides of their second single. A slightly later recording of 'Love Me Do' to that previously released, was selected for the album. This version would also appear on a subsequent EP and later still on an American # 1 single in 1964.

The iconic front cover shot was taken at the then headquarters of EMI Limited at 20 Manchester Square in London's West End in early 1963 by Angus McBean. EMI remained in the building until 1995 before moving to West London taking the famous balcony railing with them.